Where they male or female? Age? Where did they come from? When did they arrive? These are the questions that Lydia Lingerfelt and Dr. Pilger wanted to answer about the two skeletons that are owned by Agnes Scott College Biology department. They decided to use osteological information to learn about the biological history of the two  skeletons, historical records, catalogs, and surveys completed by Agnes Scott alumni to discover the year the skeletons arrived.

In addition to discovering the time the skeletons arrived, Lydia and Dr. Pilger wanted to find the age, sex, and health status of these two skeletons. They sent out surveys to Biology majors who attended Agnes Scott from the year 1965 and earlier years, looked at yearbooks dating back to the year 1889, and old catalogs to try to figure out when the skeletons arrived. It was discovered that one skeleton was used in a Physiology and Hygiene class in 1906 and the oldest alumni recalls seeing a skeleton when she attended Agnes Scott in 1931. Also, there is a reference to a skeleton in an Agnes Scott yearbook that was made in 1899 referring to the skeleton as Bonsey.

In conclusion, they discovered that the skeletons were both males and their age ranged from 35 to 55, one skeleton has been at the college since 1899 and the second arrived before 1931, skeleton A had servere periostitis of the left femur, and skeleton B had servere periodontitis and was a vegetarian.

Characteristics of partial seizures are:

The lab that she was working at researches epilepsies that are caused by genetic mutation. For her research experiment, she used mice that were wild type, heterozygous, and homozygous male and female. The heterozygous and homozygous mice were mutant. She  induced seizures into these mice. The wild type mice were not effected, but the heterozygous and homozygous mice either died or lose weight and died. It seems that losing weight comes before death. In conclusion, the DY mutant mice had an increase in susceptibility to seizures, homozygous mice had an average life span of 26.7 days, her mice model results are similar to the results of other SCN1A models, and mice models can be used to understand the mechanisms of epilepsy. She will do future tests that involve EEGs, drug treatments, and behavioral analysis. 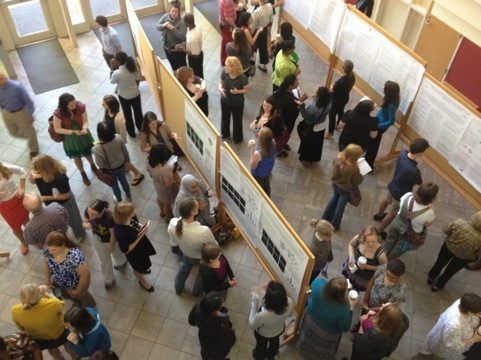 Have you been working on a research project or performance?
Do you want to share your work with your colleagues and peers?

DEADLINE: MARCH 20th
**THIS IS A FIRM DEADLINE**

To submit your abstract or a description of your project, go to our new SpARC MOODLE page

Go to Moodle, click on Non-academic courses and then click on the SpARC heading (on the second page)

NOTE: It is very important that you gain IRB (Institutional Review Board) approval for any research involving human subjects, and IACUC (Institutional Animal Care and Use) approval for any research involving non-human animal subject, PRIOR to conducting your research. Human subjects research includes interviews, surveys, experiments, etc. Please apply for IRB approval of your research as soon as possible. Follow the link to ASC’s IRB website: http://irb.agnesscott.edu or the link to ASC’s IACUC website: http://facultygrants.agnesscott.edu